Due to the COVID-19 pandemic, Micronesia is currently closed to tourism. We expect that Micronesia should be opening up soon. You can find out more information on our COVID-19 information page here.

Remote Island Micro-Brewery has been Refreshing Divers for 20 Years

Beer and seafaring. They go together like fish and chips. Since the 5th millennium B.C. when beer was first fermented by the Mesopotamians, the two have been irrevocably entwined. As the beverage made its way to Europe over the next centuries, a weak form was standard fare on the ships that plied the waters of the world. Today, many countries have their own favorite brew, some supplied by enterprising local brewers. 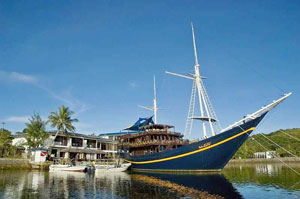 The remote island of Yap, one of four states in the Federated States of Micronesia in the far western Pacific Ocean, is no exception.

The knowledge of fermentation and distillation came late to Micronesia, arriving in the mid-19th century with whalers and copra traders. But it wasn’t until a mustachioed Texan arrived with the tide on the remote island of Yap in 1976 as a young Peace Corps volunteer, eventually building the Manta Ray Bay Resort and Yap Divers, that a local brew was born. In 1999, Acker launched Stone Money Brewing Company to provide a refreshing draft for his guests at the end of a long day of diving and snorkeling.

Now celebrating its 20th anniversary, the micro-brewery that’s named after the island’s unique stone money currency, was inspired by Acker’s friend, Greg Wilson, owner of Cook Island Divers, who has been brewing brew for more than 40 years. During his third visit to Yap in 1999, Wilson brought the equipment and supplies for Acker to begin brewing in his home kitchen using two liter plastic soda bottles. But it wasn’t long before Acker’s wife, Patricia, told him to take it elsewhere. She wasn’t pleased with the smell that was permeating the house.

The fledgling operation was relocated to the Mnuw, a 19th century 170’ phinisi, two-masted sailing ship that Acker brought from Indonesia, renovated into a restaurant and bar and moored next to the hotel. Enter Ian Ward of Brewvisions, Ltd. in London who was hired by Acker to help get the operation up and running. 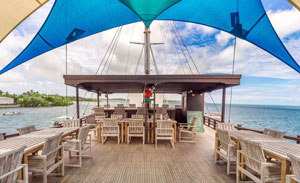 Former chef and Swiss native, Fredy Gull, then became the brewmaster. Gull had visited Yap many times as a diver during his vacations from working in luxury hotels throughout the Pacific region. Acker convinced him stay on in 1994 as a dive instructor and he eventually took the helm of the 600 litre microbrewery. The shiny steel equipment is now located in the resort’s lobby behind smoked glass where it looks like a Rube Goldberg contraption to the uninitiated. 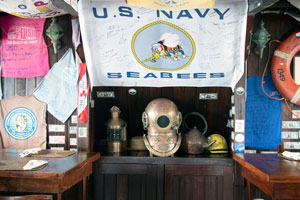 The divers who arrive in Yap from all over the world to swim among the resident population of manta rays, reef sharks, sea turtles and other denizens of the surrounding, protected reef, invariably heed the call for Happy Hour at 4:30 every day when the 18th century cannon is fired from the bow of the Mnuw. It’s then that the steins come out – a dozen or more hanging above the bar on the upper deck with the names of regulars tagged for retrieval – and the crew begins filling them with the two popular lagers – Manta Gold, a European lager “made from the finest malted grain and European hops,” Acker says proudly, and Hammerhead Amber, a dark lager with “more of an American West Coast flavor.” Some prefer the Two Step, a mix of both that honors Acker’s Texas roots.